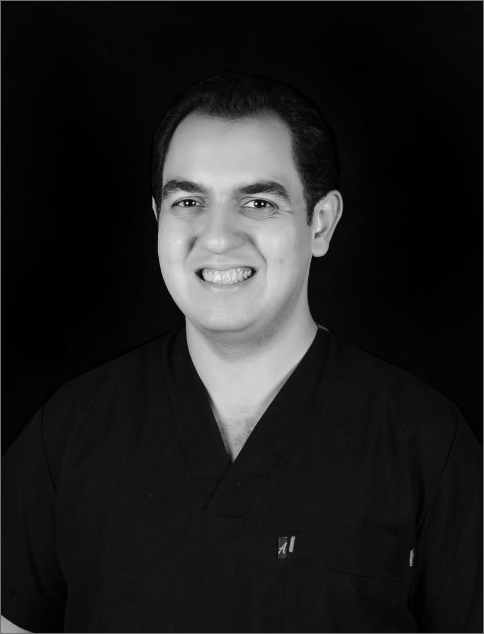 Dr Wael Alaa was born in Jeddah, Kingdom of Saudi Arabia, finished his high school there earning high honors in Cambridge International General Certificate of Secondary Education (IGCSE) allowing him to pursue his passion of becoming a dentist. He graduated from Misr International University in 2011 with high honors, with
undergraduate courses accredited from University of Georgia he was ready to start his career. In 2008 he successfully passed the National Dental Board Exam (NBDE) – Part 1 After finishing his degree he finished his internship year with 9 months in Misr International University and 3 months in Ain Shams University. During his internship year he realized that challenges ahead needed skilled and well educated personnel, therefore successfully completing 3 courses accredited from the ADA (American Dental Association) in the fields of Implantology, Endodontics and Esthetic Restorations. He
was granted a membership in DGOI (2012) for successfully undertaking 6 months of Implantology course in Misr International University.

He has started his career as a Resident in the Oral and Maxillofacial Surgery Department, Misr International University as soon as he finished his Military Service in 2014 and is still working in this esteemed department till now. During those years he had attended more than 25 International, African and Egyptian conferences and workshops.

He earned his Master degree in Dental Sciences at the Faculty of Dentistry, Ain Shams University in 2020 to become an Oral and Maxillofacial Surgeon and has participated in numerous cases under both Local and General Anesthesia. With a number of cases currently under review for publications in esteemed Egyptian and International Journals.

During his career he was a Board Member of Dentist on the Rise Association (DOTRA) organizing a number of seminars, symposiums and a Conference (with SENAME in 2016) and was honored to participate in many community services in what he believes in to be a payback to the community.

He is currently a member of the Egyptian Dental Association and The Academy of Osseointegration.

We Are One of the Leading Dental Centers in Egypt With More Than 15 Years of Experience; We Offer You Optimum Patient Care and Professional Medical Education.